To hand down expertise and skills of blacksmiths in Sanjo and continue to exist.

To keep a production centre and create employment in Sanjo.

To learn new things from the past and develop the factory.

To work on ‘Monodukuri’ craft with pride.

To make the work an admiration of next generation in Sanjo.

Sanjo is well-known as “a town of blacksmiths” as well as a town of hardware production highly praised by the people inside and outside of Japan. Ikarashi River is located in the center of Sanjo. Once upon a time, the river which is called “Abare-Gawa(brutal river)”, was well-known for having been flooded again and again since olden times. During three years from the second year of Kanei era(1625), Otani Seibei, who served as a governor’s officer of Edo-Bakufu(the government in Edo era), came to give aid to poor peasants in the area that were suffering from the constant flooding. He also invited blacksmiths to teach the locals how to make Japanese hand-forged nails for their side business. 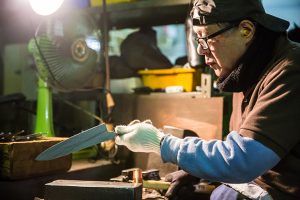 In the first year of Kanbun era(1661), new forging techniques were introduced from Aizu area to Sanjo. Thanks to that, the blacksmiths in Sanjo began to diverge from producing nails to specialize in making sickles, saws, and kitchen knives.

With increase in number of the specialized blacksmiths, marchants gradually appeared to deal with hardware products made in Sanjo. They used rivers such as Igarashi River and Shinano River(the longest river in Japan) to expand their business area. As a result of that, they also contributed to make Sanjo well-known as “a town of hardware products” throughout the country.

During these forging histories in Sanjo, the founder, Sone Torasaburo started Tadafusa from nothing in the 23rd year of the Showa era(1948). He made various kinds of knives such as sickles, short swords and kitchen knives by using the forging techniques he learned as an apprentice making hand-forged metal scales. He gradually started to specialize in making fishing knives and then also address a need to create kitchen knives for home and professional use and special knives for Soba up to today. Since the company’s foundation, we strive to create “the best products” for our customers by hand through every single process and to make each knife with our utmost enthusiasm.

Our products won various prizes, such as Good-Design Award and Good Design Award of Small and Medium Enterprise, because we have continued making great efforts to create hand-forged knives that customers really desire with the demands of the present day.

From now on, we promise to keep creating knives with great high-quality to meet customers requests and the needs of the current age. Like fighting against the disasters of the Ikarashi River, we will continue to promote “Sanjo as a town of blacksmiths” to the world through our products.